The ENEOS Autofashion S14 will be a new build exclusively for SEMA; the synthetic high-performance motor oil brand will also attend AAPEX

ENEOS is excited to announce its appearance and special activities taking place at SEMA 2015. To kick off the show, ENEOS will unveil the ENEOS Autofashion S14, a unique vehicle created exclusively for SEMA in partnership with Autofashion USA, a custom vehicle shop based in San Diego, CA. ENEOS will also host its partner drivers Kyle Larson (HScott Motorsports with Chip Ganassi No. 42 for NASCAR XFINITY), Steve Arpin (Loenbro Chip Ganassi Racing No. 00 for Red Bull Global Rallycross, or GRC) and Akinori Ogata (No. 63 for NASCAR Camping World Truck Series) at their booth. 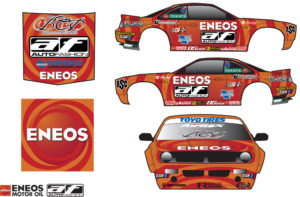 “Using a Rocket Bunny kit, we’re taking a new type of vehicle and giving it an old, retro Nissan look,” says Freddie Fernandez, owner of Autofashion USA and builder of the SEMA vehicle. “It will have a 2011 Chevy Camaro LS3 V8 6.2 liter engine with a supercharger, and a GM TR6060 Six-Speed transmission.”

Prior to its unveiling, follow on our website and social media for teasers showing the car’s progress.

This unique vehicle will feature a final ENEOS wrap to complete the look and will be powered using ENEOS Sustina 5W-30 (recommended for superchargers) and ENEOS Gear Oil products. ENEOS is manufactured specifically for Asian OEM standards, although its low viscosity, all-synthetic and high quality composition make ENEOS a top choice for most vehicles, particularly those with performance in mind.
ENEOS will be unveiling the custom car at 10:00 am PST on Tuesday, November 3rd at booth number 24829 at SEMA, which is known as “…the premier automotive specialty products trade event in the world,” and located at the Las Vegas Convention Center in Las Vegas, Nevada. It will be on display in the booth for the remainder of the show, which ends Nov 6.  Visit SEMA site
On Wednesday, November 4th, from 10:30 am – 11:30 am, SEMA attendees can also meet ENEOS drivers Kyle Larson, Steve Arpin, and Akinori Ogata, who will be appearing at the booth during that time. Arpin will race later that day at GRC Las Vegas.

ENEOS will also attend the AAPEX show, which focuses on the aftermarket parts industry, and takes place November 3 – 6, in the Sands Convention Center in Las Vegas. They will be located at booth #6548.

About Autofashion USA
Autofashion is a place where customers can purchase high quality auto products at a reasonable price with dependable installation and receive the best customer service, anywhere. The experienced staff consists of MECP Audio Installers, ASE Certified Mechanics, technical support staff, and a wholesale & retail department. The staff at Autofashion USA is willing to help in any way they can. “You Dream It, We Do It.”

About Kyle Larson
Kyle Larson, a native of Elk Grove, Calif., has raced in a myriad of cars since beginning his career in 1999 at the age of seven.  He has raced in cars ranging from Outlaw Sprint Karts, winged and non-winged sprint cars, trucks, sports cars and stock cars. Despite his young age, Larson has built an extensive and impressive racing resume, with more than 200 race victories over the series in which he has raced.
Larson currently drives the No. 42 Target Chevrolet SS for Chip Ganassi Racing in the NASCAR Sprint Cup Series (NSCS). He also races a partial schedule in the NASCAR XFINITY Series (NXS) for HScott Motorsports with Chip Ganassi in the No. 42 ENEOS Chevrolet Camaro, highlighted by his win with ENEOS on the car at Charlotte in 2014. Larson is only the sixth driver to win both the NXS and NSCS rookie honors, which he did in back-to-back years.  More about Kyle Larson

About Steve Arpin
A native of Fort Frances, Ontario, Canada, Steve Arpin attended his first race at just two months old and was born with a love for anything with an engine. He began his motorsports career racing go-karts and snowmobiles. In 2008, Arpin’s journey into NASCAR began when he was discovered by Carl Edwards. Arpin was chosen to drive Edwards’ USAC Silver crown car for four races, earning Rookie of the Year honors. After multiple successes in NASCAR, this versatile driver recently found his home in GRC last season and has had multiple top finishes this year. Arpin drives for Loenbro Chip Ganassi Racing.

About Akinori Ogata
Originally from Kanagawa, Japan, Akinori Ogata began racing in the MJF Motocross All Japan Series in 1987. Since then, he has performed in a variety of bike and auto racing series, including the NASCAR K&N Pro Series – East. He currently competes in the NASCAR Camping World Truck Series. More about Akinori Ogata

The Brand: ENEOS
ENEOS is the brand name for premium synthetic oil products manufactured and sold by JX Nippon Oil & Energy Corp., the largest oil company in Japan. ENEOS products are the highest quality automotive lubricants available in the marketplace today. These products are on the cutting edge of base oil and additive technologies, the result of joint engineering and research with all of the Japanese automotive manufacturers. ENEOS lubricants provide exceptional performance, power and protection for a wide variety of applications including race cars, motorcycles and street automobiles. View more about ENEOS and JX Nippon Oil & Energy
About ENEOS Products
Products made by ENEOS include premium synthetic motor oils, transmission fluids, and gear oil. View more about ENEOS Products
Our products are available throughout North America. View Where to Buy our products to find a retail location near you.