ENEOS Partners with Hoonigan for SEMA 2017 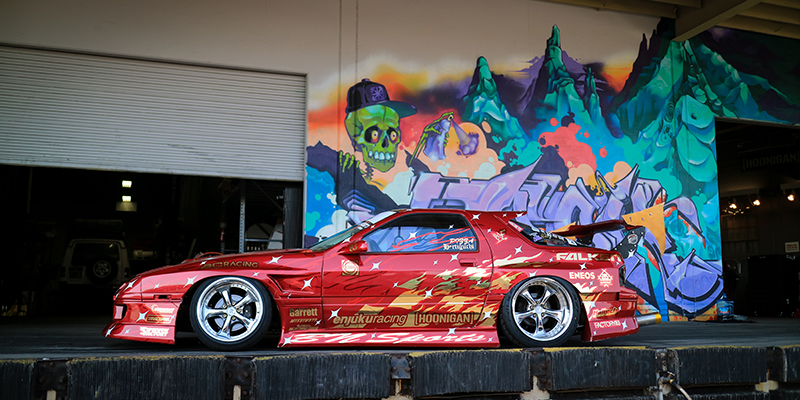 JXTG Nippon Oil & Energy, creator of ENEOS, has joined forces with the car crazy HOONIGAN brand at the annual SEMA show in Las Vegas (Oct 31-Nov 3, 2017). The Japanese oil company partnered with HOONIGAN to launch its new ENEOS RACING Series motor oil, which was unveiled to the public in its Central Hall booth #24829.

In addition to displaying the new motorsport-focused motor oil line, the ENEOS booth welcomed the Hoonigan / Hertrech Mazda RX-7 drift car into its booth for SEMA week. Driven by Hert Eugene Jr, the 1992 Mazda RX-7 (FC) known as Twerkstallion, was one of the first competition vehicles to use the ENEOS RACING PRO motor oil line in the USA. Fitted with a bridge-ported Mazda 13B Rotary with Garrett GTX35r turbocharger, Hert relies on consistent lubrication to excel in drift events.
ENEOS RACING PRO motor oil has been formulated to provide relentless performance for serious professionals. It boasts superior temperature stability under hard use and prevents sludge build-up, which is the enemy of high-performance engines.
The unique formulation of the ENEOS RACING PRO motor oil line will unlock superior horsepower at higher temperatures, while providing the top level of protection to critical engine components.

To put the new ENEOS RACING PRO motor oil to the test, Hert, Twerkstallion and HOONIGAN created a special video to share with its huge online fan base. The video focuses on the latest preparation for Twerkstallion, including a dyno session, where the superior lubricant and high-temperature stability helped to maximize power output from the Wankel. The video can be seen in the ENEOS booth at SEMA 2017 ENEOS social media channels or the link below.
“When driving a drift car, I rely on engine power to keep the wheels spinning, allowing me to attack the course. The engine lives at high RPM, so proper lubrication and efficient oil delivery are essential to power output and engine longevity. I’m really excited to use ENEOS RACINGPRO Series motor oil and look forward to putting it to the test in my next drift event,” Hert Eugene Jr commented.
“We are delighted to be working with Hert and HOONIGAN,” said Hiromi Takahashi, Deputy General Manager of JX Nippon Oil & Energy, USA Inc. “Their high energy approach to motorsports and life and the perfect proving ground for the new ENEOS RACING Series and we look forward to their feedback as they continue to experience the benefits of the latest ENEOS motor oil.”
ENEOS RACING Series motor oils will be available in March 2018. More information, including updates as they become available, can be found at: www.eneos.us/racing-series
Please visit ENEOS at SEMA 2017 in Central Hall booth #24829 to learn more about the ENEOS RACING Series motor oil.